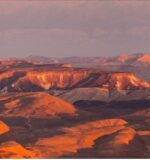 The spread of humans out of Africa through the Middle East may have been helped along by a very ordinary substance: dust.

More specifically, the silty sediment known as loess seems to have played a crucial role in making the Southern Levant, on the east coast of the Mediterranean, such a fertile and hospitable corridor of land for our ancestors to travel through.

Without this region developing as it did, human beings would have had a much tougher time getting from Africa to Eurasia along this path, the researchers say.

There’s a reason the ancient lands stretching from Egypt around to Iraq are referred to as the Fertile Crescent, as you can see below. “The high amounts of coarse silt deposited on the landscape have contributed to the unique sustainable agriculture in the southern Levant, which assisted in transforming the Levant into ‘the land of milk and honey’ and a cradle of civilisations,” the researchers write in their paper.

The new research offers several findings that challenge current hypotheses for why the regions around the Mediterranean vary so much in terms of soil type: whereas thick, fertile soil usually develops in wet and humid climates, and thinner soil in drier areas, in this part of the world the opposite is true.

Some experts put this down to erosion and human activity, but the new study suggests another factor is at play – the spread of loess, which can thicken up soils in regions where the weather isn’t turning bedrock into soil fast enough.

An extensive set of samples collected from around these regions shows that places with thin soils hadn’t received enough loess to form the rich soils needed for agriculture, but places along the southeastern Mediterranean had – primarily from the nearby Negev desert and its huge dune fields.

The loess would have started to accumulate during the Pleistocene around 180,000 years ago, the researchers suggest, produced as glaciers ground up bedrock and deposited sediment in what is now the Negev. That extra dust source would’ve been crucial in producing thicker soils in the Levant.

“The whole planet was a lot dustier,” says Rivka Amit, from the Geological Survey of Israel. “Erosion here is less important. What’s important is whether you get an influx of coarse [dust] fractions. [Without that] you get thin, unproductive soils.”

Since the retreat of the glaciers and their weathering effects, the main production line of loess has been cut off, and the soils in the Mediterranean today are just recirculating the loess that’s already there.

Going back in time to before Homo sapiens travelled out of Africa in significant numbers, the Levant region would’ve been much more inhospitable – as shown by the very thin soils the researchers discovered underneath the fine-grained loess sediment in their samples.

“The landscape was totally different, so I’m not sure that people would [have chosen] this area to live in because it was a harsh environment and [an] almost bare landscape, without much soil,” says Amit.