Dressing Up a Rover as a Baby Penguin—For Science! 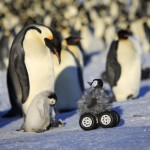 Scientists who study wild animals want to get as close as possible to their subjects without stressing them out or disrupting their natural behaviors. One possible solution: remote-controlled rovers.

In a new study, Yvon Le Maho of the University of Strasbourg in France and colleagues equipped 34 king penguins with an external heart rate monitor that could be read with an RFID antenna (the same technology lets you into your office or onto the subway with the swipe of a card). A day later, they sent an unadorned 4-wheeled rover into the colony. Not only did the penguins let the rover get close enough to read their monitors, the birds’ heart rates increased less and returned to normal more quickly than when the same task was done by a human with a hand-held reader. In another experiment, the researchers disguised the rover as a penguin chick and sent it into a colony of notoriously shy emperor penguins. The birds allowed it to approach (see above) and in one case even infiltrate a creche of chicks (see below). Finally, they tried the undisguised rover on southern elephant seals, massive animals that can weigh more than 7,000 pounds. The seals hardly seemed to notice. As the researchers write—with typical academic understatement—in a paper published today in Nature Methods: “This is notable as elephant seals generally react strongly when humans approach their tails (data not shown).”

Le Maho is already using the rovers to study how climate change is affecting the breeding success and survival of king penguins. But he and his colleagues say there are many other possibilities. The rovers could be modified, for example, to record vocalizations of animals or to gather data from sensors mounted inside their territory without disturbing them.