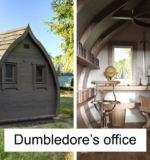 Most of us have been working from home during this pandemic. That means we’ve had a corner in our home dedicated to our office. Some just open up a laptop in bed, some have a whole professional workstation, some just repurpose their gaming computer. Even so, most probably tried to make it nice and cozy, so that work hours would go smoother.

The designers from HouseholdQuotes decided to inspire some people and maybe even give some ideas on how you could decorate your office based on your favorite TV show or movie. They created the concept and 3D work, making 6 garden rooms that would be the offices of famous characters like Dumbledore or Michael Scott. Perhaps this will give you some fun ideas for your own workplace!

Michael Scott’s office (The Office US) “Michael Scott is the Regional Manager at Dunder Mifflin, but let’s be honest, he doesn’t do a whole lot there. In fact, Jim once created a graph that showed Michael spends 80 percent of his time distracting others, 19 percent procrastinating, and 1 percent critical thinking. So perhaps with a garden shed for an office, Michael might actually… get some things done?

If you’ve seen The Office, the exterior of this garden shed probably looks familiar. Those classic, somewhat industrial greys, that boxy, office building shape. Everything about the design of this garden shed says: this is a place of business, a place where things get done.” “Inside this Michael Scott-inspired office shed, you’d have everything you need for a productive day of distributing paper: plenty of storage space, lots of desk space, those calming green walls… Of course, if you’re Michael Scott, you’d still find plenty to distract yourself with… Notice anything familiar here?” “Charles Montgomery Burns, a.k.a. ‘Monty,’ a.k.a., Mr. Burns, is the infamous and greedy owner of the Springfield Nuclear Power Plant. A lot happens in his office in The Simpsons: people falling through trap doors, being watched on monitors, and of course, that one time a portal to Hell opened up there. Would Burns have room to be so evil if he had to size down? (Probably so, yes.)

There’s no missing this garden shed office: it looks like a lawsuit waiting to happen. (Of which there are many in the show.) From the barbed wire fence to the bright yellow NUCLEAR warning sign, anyone approaching will know that Burns’ office shed is not a place to just walk into unless you want him to release the hounds.” “Burns’ is an office that screams wealth and importance: leather-bound books lining the walls, rich wooden surfaces, that classic purple velvet-topped desk. If Burns brought his work home, we imagine it would look much the same but slightly modernized. A marble polar bear, rather than his stuffed one; more subtle monitors to spy on his employees, and of course, a handy way to dismiss them if they start to get irritating.” “Don Draper is the quintessential 1960s advertising exec. He’s dominant, driven, misogynist, and his diet is 90 percent whiskey and cigarettes. In the show, Draper’s office goes through changes over the years – in fact, he even moves offices at one point. So what would it look like if Draper had to move his office… into his backyard?

It’s hard to imagine Don Draper willingly working in anything less than a New York City highrise, but if he had to, we imagine it would be something like this: lots of big windows, tall, narrow, and looking out over a beautiful garden and pasture. Because the guy could use some calm.” “The inside of this shed office is all Boys’ Club – much like Draper’s office in the City. No computer – it’s hard to imagine Don Draper ever acclimating to that, lots of wood and mid-century lines, and of course, what would a work day be like without a drink or three?” “Simon Basset, a.k.a., the Duke of Hastings, is probably the person on this list most likely to acclimate to that Work from Home Lifestyle. After all, in Bridgerton, he does work from a home office… Of course, his home is a palace, and his office is about the size of a New York apartment. But if he had to work from a garden shed, at least it would be luxurious.

Simon’s office is all canary yellows and forest greens in the show, and so the exterior of this garden shed is designed to match. Of course, the hedges are not quite so polished and the trees not as well-groomed as at Clyvedon Castle, but we think Simon could make it work. Especially after seeing the interior.” “Once again, the green and yellow color scheme make the interior of this tiny office feel warm yet luxurious. The hints of gold in the accessories and the use of wood paneling, floorboards, and ladder reminiscent of a library’s, all add to that feeling of simple luxury. And, of course, it wouldn’t be the Duke of Hastings’ office without the homage to his favorite animal.” “Leslie Knope is the Deputy Director of Pawnee’s Parks and Recreation Department. She’s an overachiever and always rolls with the punches. We imagine she’d love this garden office shed – and if she didn’t, she’d certainly put a positive spin on it.

Just like Pawnee’s City Hall, this Leslie-inspired office shed is designed with perpendicular lines, double doors, and the label: Shed Hall. Rather than the grand stone steps leading up to the entrance, we have the garden shed slightly raised and surrounded by stones and a well-maintained yard – because she’s the head of Parks and Rec, after all.” “Inside this office shed, we kept things pretty simple: grey color pallet, not a lot of clutter… Leslie does have a tendency to get distracted, after all. But it wouldn’t be a Parks and Rec office without some inspirational faces, a flag or two, and that one, random, treasured gift: ‘To Leslie. Sink that shot. – Larry B.’” “Dumbledore’s office is a place of wonder. It is filled with magical glass trinkets, powerful objects, secrets, and of course, for many years, the wizard himself. It’s hard to imagine Dumbledore trading his beautiful Hogwarts office, atop the magically-moving spiral staircase, for something as small as a garden shed. But hey, there’s always an undetectable extension charm. Capacious Extremis!

The exterior of this office shed is Hogwarts Castle meets Hagrid’s hut. The lines are rounded, the windows are small, and there is certainly something magical about it. Surrounding the little offices are the lawn (where you’d probably see wizards lounging in between meetings) and Evergreen trees, much like those in the Forbidden Forest…” “Much like Dumbledore’s Hogwarts office, this one is all rounded lines and carved and beveled walls. Any wizard worth his salt would fill the space with books, plenty of glass bottles (many likely filled with memories), and that peculiar object in which to view those memories. The desk is also dotted with familiar objects (perhaps Fawkes was not around for this photo), and then there’s that ever-important gift from Gryffindor.”