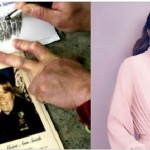 Caitlyn Jenner won Glamour Magazine’s “Woman of the Year” award and predictably, people are not happy about it. Most especially, James Smith. Smith’s late wife, Moira, won the award in 2001 for her heroic actions on September 11th at the World Trade Center in New York City. Moira saved the lives of hundreds of people by guiding them to safety during the terrorist attacks that day. She was last seen running back into the south tower of the WTC, before the building collapsed.

James Smith, a retired NYPD officer himself, wrote a ferocious letter in response to Jenner winning the same award his wife was given for her amazing acts of heroism.

“I was shocked and saddened to learn that Glamour has just named Bruce Jenner ‘Woman of the Year.’ I find it insulting to Moria Smith’s memory, and the memory of other heroic women who have earned this award.

Was there no woman in America, or the rest of the world, more deserving than this man?

At a time when we have women in the armed forces fighting and dying for our country, heroic doctors fighting deadly diseases, women police officers and firefighters putting their lives on the line for total strangers, brave women overcoming life threatening diseases… The list of possibilities goes on…

Is this the best you could do?”

“We were proud to honor his wife . . . in 2001, and we stand by our decision to honor Caitlyn Jenner…Glamour’s Women of the Year Awards recognize women with a variety of backgrounds and experiences.”

What do you think? Was this husband’s response justified or was it an overreaction?