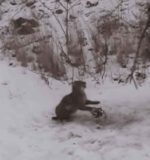 The beautiful bobcat is mainly found in North America, although it’s habitat is thought to stretch to the far south of Mexico.

It’s been around for 1.8 million years and adapts well to any surroundings, being an expert hunter wherever it chooses as home.

At the same time it’s a wild animal and rarely has any interaction with humans.

So the video you’re about to see is pretty special as a bobcat is captured on camera being rescued from a bear trap by a pair of animal heroes. However, the bobcat’s reaction is not for the faint-hearted. Chris Ward was out hiking with his friend Aaron when they spotted a bobcat with its paw stuck in a bear trap.

They weren’t sure what the animal was at first, it certainly wasn’t a bear. Slowly and cautiously they approached the trap and took advantage of what nature had to offer – namely, a large stick. Thankfully they caught the whole rescue on camera.

The bobcat, not being used to humans, tried to attack his rescuers who refused to give up, despite the animal destroying most of the stick.
Puts up a fight

Unsurprisingly the man responds to the bobcat’s feistiness with shock and some bad language slips out. But, I have to admire his determination to set this poor animal free despite the fight he puts up.

Watch the animal hero free this frightened bobcat in the video below and be warned there is some bad language.

Please share to pay tribute to all the brave animal heroes out there! You do a fantastic job for all of our four-legged friends.