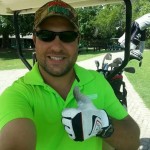 A friendly competition to see who’s got the most balls turned deadly Wednesday night when Jacques Van der Sandt fell victim to an ornery 13-foot reptile that recently came out of hibernation.

Van der Sandt and a friend had a few drinks and challenged each other to a golf ball hunt in Lake Panic out at hole number nine of the Skukuza Golf Course in Kruger National Park in South Africa.

The golf ball hunters went under water three times, but they weren’t the only ones hunting that evening. As the men stood in waist deep water, Van der Sandt was pulled under by a giant crocodile. The friend notified Kruger National Park rangers of a croc attack around 10 p.m.

When the rangers arrived at the scene, they found Van der Sandt’s body inside the mouth of the beast. They shot it dead with a rifle and shared these pictures to send a message to other crocs of the consequences of messing with golfers. They also serve as good reminder to golfers to purchase their golf balls from the club house.

According to Warrant Officer Oubaas Coetzer, spokesperson for the Skukuza SAPS, it is reported that Van der Sandt and a friend jumped into Lake Panic, which runs through the nine-hole golf course, a few times. After about the fourth time, the crocodile, which was allegedly visible earlier the day, put its jaws around Van der Sandt’s chest and dragged him under water.

A search for Van der Sandt was launched during the night. A field ranger eventually spotted the 3.9m crocodile and its victim upstream and shot it. Van der Sandt had bite marks on his chest and was dead on the ranger’s arrival.

According to Coetzer, Van der Sandt and fellow golfers were at the Skukuza Golf Club’s club house when the incident occurred at about 11pm on Wednesday 3 December 2014. The club house is situated at the 10th hole, while the bridge from which Van der Sandt is said to have entered the water is at the club’s signature hole, number 9, which is played across Lake Panic.

SANParks has confirmed that a man was killed by a crocodile in the Kruger National Park and that an investigation is underway.