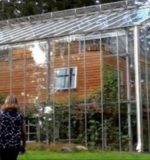 The old saying goes: those who live in a glass house shouldn’t throw stones. But they never said anything about fruits and vegetables. For one family in Sweden, living in a glass house is a reality. Well, sort of. They actually built a greenhouse around their home!

A Greenhouse to a Green Home

Charles Sacilotto and Marie Grammar wanted a way to escape the cold winters of Sweden in an environmentally friendly way. So what better way than building a greenhouse over their home? Now they have a way to heat their home and even grow their own food.

Charles, an engineer by trade, had been inspired by his mentor Bengt Warne, a Swedish eco-architect. About 10 years ago, he built the greenhouse for about 80,000 Euros, but the environmental and economic benefits have more than made up for it.

Nicknamed the Naturhus (Nature House), it is covered in 4mm thick panes of security glass. Don’t worry, it’s pretty safe as Charles assures, saying that even if it did manage to break it’d fall in small pieces to not hurt anyone.

The sunlight that enters through the windows will heat the home during the day, and the residual heat leftover can keep the heat through the night. The added benefit is that they’ve even been able to grow their own garden year round.

Due to the harshness of Swedish winters, growing fruits and vegetables has a very limited timeframe (about April to early October). But with their greenhouse, they can grow them pretty much any time they want!

They have plenty of food like grapes, herbs, cucumbers, figs and tomatoes that wouldn’t normally grow in Scandinavian winter. With fruits and veggies comes plants too, and plants are known to help purify the air and remove toxins. And prettying up the place a bit doesn’t hurt too.

Being an engineer, Charles even built a way for them to collect rainwater for themselves and the plants. He also designed and built the sewage system, including a composter for their garden. That way they’ll always be fertilized and recycled back into their own little ecosystem.

Looks like living in a greenhouse can make winter not so bad. Maybe one day we’ll find a way to make it possible for all of us to have a house like this, but until then we’ll just have to bundle up and huddle next to the fire.