Claud may only have 3 legs, but he’s as fast as almost any bobcat we have! 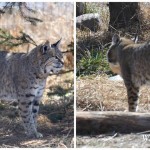 Two bobcats from different worlds are now together at The Wildcat Sanctuary where they have truly bonded and live wild at heart.

Claud is a wild born bobcat. When Claud was just a kitten, he was found caught and impaled on a fence in California. Wildlife rehabilitators were unable to save his right rear leg and it had to be amputated. This injury meant Claud could no longer be released back into the wild and The Wildcat Sanctuary was contacted in 2006 and asked to take him in. We were happy to make room for Claud.

Now living with another bobcat named Benson, Claud is doing wonderfully and sleeps cuddled up next to Benson. Being wild born, he is still timid around humans and will hide while his habitat is being cleaned.

He’s a small bobcat, but the fact that he only has three legs doesn’t slow him down one bit. Most of the time, you forget that he isn’t a four-legged bobcat since he’s so athletic in deep snow or tall grass. Even though he is still very shy around humans, he is more than willing to come out when it’s feeding time. We’re so happy that Claud was given the chance to live here with us at the Sanctuary so he can enjoy the companionship of many other bobcats.

Would you like to become part of our family of sponsors by sponsoring Claud today? You’ll receive updates, photos, and cards from him as an extra special thank you!