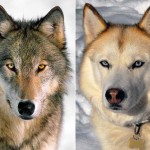 Most people can probably recognise that our love of bread, potatoes and any other carbohydrate heavy foods will have had an effect on human evolution, but now scientists are beginning to understand how it could have shaped the evolution of dogs as well.

It’s well known that dogs are the domesticated close relatives of wolves. It is generally considered that this must have occurred as wolves took advantage of the easy food source of waste food left by humans. This food would have been a very different composition of nutrients compared to a traditional wolf diet with far more carbohydrates from roots, bread and porridge than they normally would have got.

A report published in Nature this week compared the DNA of 12 gray wolves with 60 dogs (including 14 different breeds) and found there were key differences which allowed dogs to digest carbohydrates far more easily. The presence of changes to starch and sugar-processing genes would have allowed early dogs to make the most of the scraps they could scavenge from human settlements, helping them to thrive despite abandoning the pack lifestyle.


What’s really interesting about this study is not necessarily the study itself but rather the questions that it has led to. The study itself suggests that the domestication of dogs was a form of selection as the canines which were already able to easily digest carbohydrates were able to survive easier apart from the pack and consequentially became domesticated. While other scientists have suggested that these genes may have become adapted after the domestication of dogs as the carb heavy diet promoted the specialisation of the carbohydrate digestion genes. So rather like the question of which came first the chicken or the egg, science now has a different question to ponder, which came first domestication or the genes? JB