Buried In Snow, This Man Films A Mountain Rescue Dog Saving Him And It’s Lovely 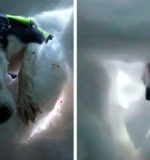 “If there are no dogs in Heaven, then when I die I want to go where they went” – is how the famed American actor Will Rogers once described his connection to these tender, selfless animals. And it’s not difficult to relate to that. Yet dogs are not only your best companions and loyal friends, but also, they’re the most vigilant protectors that will do all they can to keep you safe and sound, not worrying about going to Heaven.”Mountain Rescue Search Dogs England”, a charity dedicated to training rescue dogs to assist those in need in the wild, has recently uploaded a video in which this truth is once again reaffirmed. And indeed, not only is it life-saving but heart-warming as well. Scroll down to see the whole story.

Getting lost in remote wilderness might be dangerous and frightening, but there’s a volunteer-based organization to help those in need Among other skills, the rescue dogs are regularly trained to search for people buried in the snow During such a training drill, a volunteer, armed with a camera, buried himself in snow Doing her best, the devoted rescue dog demolished the wall of snow with her body To make it sure that when a real situation arises She will be able to provide help as soon as possible The name of this rescue dog is Flo. She is a 4-year-old rescue dog who also specializes in melting people’s hearts Check out the entire video here

People had their say