Build Your Own Planter Box With Beautiful Cascading Flowers

First, you'll need a planter box. This one is made mostly from pallet wood.

If you’re into beautiful DIY projects, then you’re in for a treat. Amy, a lover of everything DIY, runs an awesome website called “Her Tool Belt” that’s perfect for even a novice handyman like myself. Inspired by the gorgeous cascading flowers produced by store-bought planters, Amy wanted to teach herself to grow flowers that bloomed to their full potential. So, she decided to try her hand at making her own DIY Cascading Flower Pallet Planter Box — and when you see the end result, I guarantee you’ll be blown away.

“I bought some of the large Bloom Master pots years ago thinking the cascading flowers would look awesome hanging off the back deck,” she wrote on her blog in April 2015. “However the sun is really harsh during the afternoon, it gets overly windy, and every year I fail. So this year, I’m trying it again but in the front yard where the flowers will be more protected.”

Amy’s first step was to build a large planter box out of pallets. With her planter box ready to go, she began documenting the progress of her wave petunias, hoping for a jaw-dropping bloom. And that’s exactly what she got five months later…

“I used a 2″ hole saw to drill holes for the petunias,” Amy wrote on her blog. “Spacing the holes about every 6″ or so.” 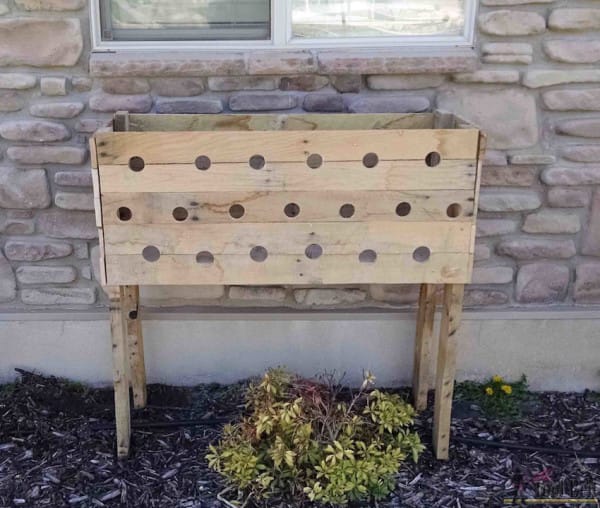