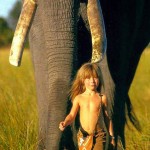 Tippi spent the first 10 years of her life living alongside some of the world’s most amazing (and dangerous) wild animals. In proof, there are images galore.

Such as the one of her hanging from the trunk of an elephant, a look of pure relaxation and happiness spread across her face.

Most youngsters might be a bit more fearful of getting close to an elephant with tusks equal in size to their small body.

But not Tippi, she’s not afraid of any animals.

Not even slimy frogs, which she clings to with the same devotion another child might show the family cat.

And if snakes make you squeal, you will die to see Tippi putting wild snakes across her lap. When you grow up in Africa like Tippi has, no animals are off limits.

After seeing enough photos you are likely wondering—where are Tippi’s parents?
Alain Degre and Sylvie Robert, Tippi’s proud parents, are freelance wildlife photographers who decided to give their daughter an untraditional upbringing, one in the heart of Africa. Just before Tippi was born, her French parents decided to move to Namibia, Africa. When both of your parents are wildlife photographers, I suppose you get some extra perks, like cuddling up to cute baby tigers and splashing in puddles with gargantuan elephants.
While Tippy doesn’t know any different, her parents are incredibly brave, as they let her sit atop elephants striding through tall grasses. Photos captured of Tippi with baby cheetahs seem somewhat harmless, but the little trooper doesn’t let full-grown wild cats intimidate her either. In one clip, Tippi’s entire shoulder disappears between the teeth of a large cheetah, but the cat doesn’t bite down. It’s as if the animals know Tippi means no harm, and they treat her gently, as if she were one of their own. Mom and dad snapped plenty of photos of their children surrounded by elephants big enough to crush them, and tigers fast enough to run away with child between teeth. Yet nothing gruesome such as this happens, instead the children appear just as happy and at ease as the animals they play alongside. Throughout her childhood Tippi became grand friends with many wild animals, including J&B the leopard and Abu the elephant.
Tippi also became close with the local Himba tribes people of the Kalahari. They taught Tippi a lot of valuable things, like how to live off of roots and berries, shoot with a bow and arrow, and speak the native language. Tippi lived like a true wild child for 10 years, before her family relocated to Madagascar and then France. Once surrounded by modern society, the family quickly became celebrities for their intriguing way of life and awe-inspiring photos. For 2 years Tippi attended a local school in France, a big change for a girl who grew up running through dirt with snakes and zebras. Unsurprisingly, she didn’t have much in common with the other school children, and so Tippi’s parents decided to homeschool her.
Tippi has written a book about her adventures, Tippi: My Book of Africa, which reached the bestseller list back in 2001. When she was 16 she had a documentary made about her adventures called, Bridging the Gap to Africa.

In total, Tippi has worked on 6 different documentaries with the Discovery Channel. Tippi is also known for her responsibilities looking over the tigers at Fort Boyard—who could possibly be more qualified?!
Today Tippi Degre is a 24-year old woman living in Paris, France where she attends the la Sorbonne Nouvelle University studying cinema. Even surrounded by textbooks and city landscapes, Tippi still feels the call of the wild.