BREAKING NEWS: Comedian Rik Mayall has died at the age of 56 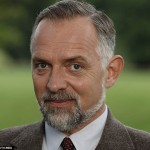 Comedian and actor Rik Mayall has died at the age of 56 today.
Mr Mayall is best known for his comedy partnership with Adrian Edmondson.
He has appeared in a number of sitcoms including The Young Ones, Blackadder, The New Statesman and Bottom.
He also featured on the big screen in films Drop Dead Fred and Guest House Paradiso.
More to follow A spokesperson from Brunskill Management confirmed that the actor passed away this morning.

He is survived by his three children, Rosie, Sidney and Bonnie, and his wife Barbara.

The comedian was best known for his work partnership with Adrian Edmondson, and appeared in several hugely successful sitcoms including The Young Ones, Blackadder and Bottom.

In The Young Ones, Mayall played Rick, a would-be anarchist that was obsessed with Cliff Richard, who became one of his trademark performances.

Rik and Ade Edmondson became one of British comedy’s favourite duos with their violent slapstick comedy Bottom, which also spawned a series of live shows.

The Harlow-born actor also became a scene-stealer when he took on the role of Lord Flashheart. Rik also made it to the top of the UK singles charts after he and his The Young Ones co-stars duetted with Cliff Richard himself for a cover of Living Doll for Comic Relief.

As well as conquering TV and the charts, Rik gained praise for his big screen projects, including Drop Dead Fred and Guest House Paradiso.

Last October, he appeared in the Channel 4 sitcom Man Down.

The funnyman told the Mirror last year that he was desperate to bring back comedy series Bottom, but Ade Edmondson scrapped the plan.

“Of course, I f***ing tried to persuade him to change his mind. But if he doesn’t want to, he doesn’t want to.”
Mayall was involved in a quad bike accident back in 1998, which left him in a coma for several days. He suffered two haematomas and a fractured skull, and his family were warned that he could die from his injuries.

Speaking of the accident last year, he said: “I’d been medically dead for all of those days and the doctors said to my wife Barbara, ‘OK we’ve kept him alive for five days now and there’s no sign of any independent life’.

“There’s a little screen next to me with a dead line and the doctor said, ‘If there’s any sign of life within the next hour we’ll keep him plugged up but if not, we’ll take the plugs out and let him die’.

“So Barbara is sitting next to me going, ‘Come on, die you b******, I want the money’. But sure enough, during the hour, this line went ‘bleep… bleep’ and I started showing signs of independent life.”

Rik recovered and returned to acting later that year.

Celebrities and fans alike flocked to Twitter to speak of their heartbreak at Rik’s passing.

David Walliams mourned: “I am heartbroken that my comedy idol growing up Rik Mayall has died. He made me want to be a comedian”, while Chris Moyles thanked Mayall “for making me laugh a million times”.

Comedian and writer Caitlin Moran tweeted: “WHAT? Rik Mayall has died? Oh, my heart is broken… God I loved you so hard”, while presenter Matt Johnson called Mayall: “One of the best”.