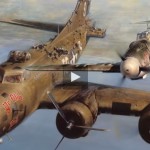 This film was taken when Bf-109 ace Franz Stigler met B-17 pilot Charlie Brown for the first time since their encounter during WWII! The complete story of Franz and Charlie can be read in the international bestselling book, “A Higher Call,” available in bookstores worldwide.

The song in this video is titled “End Titles (From ”The Peacemaker”)” by Hans Zimmer. It is available in the album, “The Film Music Of Hans Zimmer Vol. 2” on Amazon.com

About Franz Stigler:
Franz Stigler started flying gliders at age 12 and soloed in a bi-plane in 1933. He joined Lufthansa, becoming an Airline Captain, before joining the Luftwaffe in 1940. There, he became an instructor pilot, with one of his students being Gerhard Barkhorn, who would later become the second highest scoring Ace in history with over 300 victories.

Franz transferred to Bf 109 fighter aircraft upon learning of the loss of his brother August, who died piloting a bomber shot down over the English Channel. Franz flew combat in North Africa, Sicily, Italy, and Western Europe. He served as a Squadron Commander of three squadrons (Numbers 6, 8, and 12, of JG 27) and twice a Wing Commander, all flying Bf 109 fighters.

Franz formed EJG-1, possibly the first ever pre-jet training squadron before being hand picked as the Technical Officer of Gen. Adolf Galland’s elite JV 44, “Squadron of Experts,” flying the Me-262 jet.

Franz was credited with 28 confirmed victories and over thirty probables. He flew 487 combat missions, was wounded four times, and was shot down seventeen times, four by enemy fighters, four by ground fire, and nine times by gunners on American bombers. He bailed out six times and rode his damaged aircraft down eleven times.

He emigrated to Canada in 1953 and became a successful businessman. In addition to his many Luftwaffe decorations, Franz was presented with the “Order of the Star of Peace” by the Federation of Combattant Allies En Europe for his act of compassion on December 20, 1943. He is believed to be the only Luftwaffe pilot to be so recognized. Franz was also made an honorary member of the 379th Bomb Group Association. Our friend, Franz, died in 2008 at the age of 93.

About Charlie Brown:
Charlie Brown graduated as a US Army Air Forces 2nd Lt. in April 1943. He arrived in England in early November 1943 as a B-17F pilot/aircraft commander and was wounded twice in completing 29 bomber combat missions out of 31 attempts (24 over Germany proper) with the famed 379th Bomb Group. He then delivered fighters and bombers, and flew transports from North Ireland to the United Kingdom until becoming a B-17 instructor pilot stateside. Itching to return to duty overseas, Charlie became a C-54/C-87 pilot and flew in the CBI theatre until the end of the war.

After retiring from the Air Force as a Lt. Colonel, Charlie accepted an appointment as a Senior Foreign Service Reserve Officer, serving for six years throughout Laos and Vietnam during the Vietnam War. After thirty years of government service he retired in 1972 and formed a combustion research company. In 1992 he was recognized by the Governor of West Virginia (Charlie’s home state) with the “Distinguished West Virginia Award,” both for his government service and research career. He was awarded a symbolic “Governor’s Medal” by Governor Jeb Bush on October, 2001.

Charlie’s most prestigious honor was belatedly bestowed by the USAF in February 2008, when he was awarded the Air Force Cross (second only to the Medal of Honor) for bringing his badly damaged B-17 home to England during his December 20, 1943 mission. Our friend, Charlie, died in November 2008 at the age of 86.