Before and After ISIS: Heartbreaking Photos Of Destroyed Historical Monuments In Syria 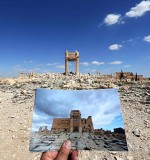 A year after it was taken by ISIS, the Syrian city of Palmyra was recently retaken Syrian forces backed by Russian airstrikes. Previously home to many of the world’s most treasured historical sites, many artifacts were destroyed by the Islamist forces in an anti iconoclastic purge. Now, Joseph Eid, a photographer for AFP news agency who took photos of the site just two years ago, has posted before-and-after images of the damage.
“Of course the Temple of Bel will never be the same,” Syria’s antiquities director, Mamoun Abdulkarim, told the Times Of Israel. “According to our experts, we will definitely be able to restore a third of the destroyed cella, or maybe even more if we carry out additional studies with UNESCO’s help…I invite archaeologists and experts everywhere to come work with us because this site is part of the heritage of all humanity.” The Temple of Bel dated back to 32AD The remains of Temple of Bel’s “Cella” Ruins of a statue in the Palmyra museum