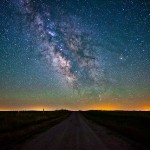 During the month of May, I shot Milky Way timelapse in central South Dakota when I had the time, and the weather cooperated. The biggest challenge was cloudy nights and the wind. There were very few nights, when I could shoot, that were perfectly clear, and often the wind was blowing 25mph +. That made it hard to get the shots I wanted. I kept most of the shots low to the ground, so the wind wouldn’t catch the setup and cause camera shake, or blow it over. I used a Stage Zero Dolly on the dolly shots and a “Milapse” mount on the panning ones.