Baby spa takes the stress out of being an infant with floating, massage 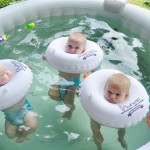 Bobbing for babies! These infants enjoy water therapy with a little help from special doughnut-shaped floatation devices around their necks.

When napping, nursing and being cute becomes too exhausting, babies now have the option of being pampered at a baby spa.

Float Baby, a new Houston, Texas, establishment that caters to customers as young as a few weeks old, lets infants unwind in the water and enjoy the benefits of massage.

Owner Kristi Ison got the idea after reading about a similar concept in the U.K. She believes her business is the first baby spa of its kind in the U.S.

“What we find is that the babies find the water very soothing and relaxing,” Ison, 43, told TODAY Moms.

“Before they can roll over, they want to move and they’re not able to — they’re either in a carrier or being held — and so when we put them in the water and they experience that freedom, they really enjoy it.”

Some 130 babies have come through Float Baby since it opened for business in February. A visit consists of two components: hydrotherapy, with the babies floating in a little pool for about 20 minutes while wearing special doughnut-shaped floatation devices around their necks to keep their heads above water; and neonatal massage, performed by their parents while being coached by Ison, who is a certified instructor of infant massage.

A visit costs $65, with discounts offered to parents who book multiple sessions. Ahhh, I remember this feeling! The spa owner says younger babies take to the water especially well, because they’ve spent nine months floating in the womb.

The younger the babies are, the better they react to the water because they recently spent nine months floating in amniotic fluid in the womb, Ison said.

“The newborns especially like it, we see them float and then have a little cat nap while they’re floating,” she noted. “The older babies, they really like to kick around and splash and socialize.”

The floatation devices — developed by Float Baby and patent-pending — have an inner ring that supports a baby’s chin and base of the head, while allowing the arms and legs below the water to move freely, Ison said. The water is purified and its temperature is kept at 95-98 degrees Fahrenheit. The babies wear swim diapers and the pools are washed out daily, she added. Parents gather around the pool and watch the little ones during the session.
Ison is a big fan of floating for babies, with her business touting benefits such as increased strength. Experts said any type of exercise will improve strength and cardiovascular health.

“I don’t think there is anything special about being in the water. Crawling is easier on the floor,” said Dr. Claire McCarthy, a pediatrician and medical communications editor at Boston Children’s Hospital.

“I don’t think this is necessary, and I think that babies can get the same health benefits from active play at home with their parents — with the additional bonding benefits, and for free.”

Still, a visit to the spa should be safe as long as the babies are carefully supervised in the pool and the water is kept clean, McCarthy said. The floatation devices don’t pose a concern as long as they are well-inflated and removed if there seems to be discomfort, and as long as the child is constantly watched, she added.

And though Float Baby’s youngest customer so far was 3 weeks old, McCarthy said it would be better for babies to have some trunk and head control, which starts at around 4 months. By then, the risk of infections they might catch from other babies would be reduced as well, she added.

And if parents would like their baby to play in the water and get the exercise benefits, McCarthy said she would recommend a parent-child swim class over the spa offerings. And of course, there’s always the bathtub!