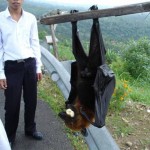 The giant golden-crowned flying fox gets its species name from the golden fur around the head, in sharp contrast to the black body. Like all other fruit bats, they have no tail. They are among the largest bats, with a wingspan of 1.5–1.7 m (4 ft 10 in–5 ft 7 in) and weighing 0.7–1.2 kg (1.5–2.6 lb). The only other bats with comparable measurements are a few species of Pteropus.

HERE–>> This Bird Looks Like It Came Straight Out Of Paradise

No, these photos are not photoshopped. I can still tell you someone in the comments is going to be like, “NO WAY THAT’S REAL, BRO!” But those are my favorite types of animals to share with you all; ones that cannot possibly exist on Earth but do! The Giant Golden-crowned Flying Fox (Acerodon jubatus) is a prime example of one of those such animals.

These massive and rare bats are named after the golden fur that lays atop their head which sharply contrasts against its large, dark body. Giant Golden-crowed Flying Foxes have an astonishing wingspan between 4’10″ to 5’7″. They weigh from 1.5–2.6 lb. With such long wings, they have to wrap them around their entire body while sleeping making it look like their draped in a long black cape. Now that my friends, is how you know you have a big bat. Little is known about the behavior of these impressive bats because the area they inhabit is so remote. They have been recorded at elevations from sea level to 1,100 m (3,600 ft). They make crazy journeys to find food (their favorite being figs) and will fly 25 miles or more in ONE NIGHT to fill their bellies. Another hard reason to find these guys is that they don’t put up with any humans (could you blame them?) and in a study conducted in 2005 NO bats were found living in inhabited areas. Another study found them to be forest obligate species, meaning that they stay hidden in the forest a majority of their time.

Unfortunately, this incredible species is under threat from deforestation as well as hunting. However, there are a couple of agencies working to preserve the future of the weird and wonderful Golden-crowed Flying Fox. The local government of Maitum, Sarangani in the Philippines has organized a campaign to save the species from extinction. The Subic Bay region of the Philippines plays host to a lot of the research on this species. Subic Bay is a 14,000-acre (57 km2) protection area that is managed by individuals who want to preserve the species.

Bat Conservation International, the Wildlife Conservation Society, the World Wildlife fund, Lubee Foundation are among the other groups helping to save this species. They provide research funding and education worldwide as well as locally. Check them out to see how you can help!

The megabat, contrary to its name, is not always large: the smallest species is 6 cm (2.4 in) long and thus smaller than some microbats.[2] The largest attain a wingspan of 1.7 m (5.6 ft), weighing in at up to 1.6 kg (3.5 lb).[3] Most fruit bats have large eyes, allowing them to orient themselves visually in twilight and inside caves and forests.

Their sense of smell is excellent. In contrast to the microbats, the fruit bats do not use echolocation (with one exception, the Egyptian fruit bat Rousettus egyptiacus, which uses high-pitched tongue clicks to navigate in caves).[4]