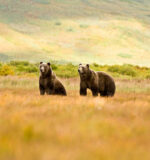 Alaska is a place of big pictures. The best places to photograph in Alaska include icy fjords, wild mountain valleys, and historic mining towns. A wide-angle lens is recommended for landscape photos of the state, and a telephoto lens will help capture the wildlife within The Last Frontier. The sky over Alaska is also known for its photogenic qualities, including the aurora borealis and midnight sun.

Encompassing high elevation peaks of the Alaska Range, Denali defines Alaska adventure and landscapes. Denali, itself, formally Mount McKinley, is the highest mountain peak in North America. A 92-mile park road is all that accesses this six-million-acre national park and preserve. Denali Park Road is only accessible by bus in the warmer months of the year. At the end of the road, Wonder Lake offers unparalleled views of the wild landscape.

Stretching for 127 miles between Anchorage and Seward on the Kenai Peninsula, this scenic byway is a gateway for great pictures. From Anchorage, the first 50 miles of the route hugs the Chugach Mountains and shoreline of Turnagain Arm. Alongside dramatic mountain features, whales are spotted from the shoulder of the highway. A thoroughfare for adventure, the highway concludes at the seaside town of Seward.

A popular spot for wildlife photography in Alaska, Brooks Camp within Katmai National Park is teeming with wild brown bears. Boardwalk trails and viewing platforms allow people to photograph these massive mammals. Three observation platforms on the Brooks River are accessible from Brooks Camp, including an iconic spot overlooking Brooks Falls. June and September tend to see the highest concentration of bears on the Brooks River.

On the Kenai Peninsula, Exit Glacier is one of the most accessible glaciers to drive to in Alaska. A 15-minute drive from Seward, a visit to the crackling blue Exit Glacier also puts visitors into the vast expanse of Kenai Fjords National Park. From Exit Glacier, the Harding Icefield Trail extends for eight miles through this coastal environment.

Every photographer should have the Northern Lights on their photo bucket list. The city of Fairbanks offers a near guarantee to see this celestial show, also known as the aurora borealis. The Aurora Season, between August 21 and April 21, is the window for checking out the Northern Lights. Throughout the rest of the year, Fairbanks is better known for its midnight sun.

This wildlife conservation center takes the guesswork out of photographing wildlife. An hour east of Anchorage on the Seward Highway, this wildlife sanctuary adopts animals that are no longer fit to live in the wild. Several viewing platforms at the conservation center allow visitors to look at these animals up close. A few of the resident animals include wolverines, black bears, moose, and foxes.

In Southeast Alaska, Glacier Bay National Park is a popular cruise ship destination. The entire region is home to an impressive collection of tidepool glaciers. The 21-mile-long Margerie Glacier is arguably the most impressive. This crackling attraction is in the West Arm of the park and only accessible by boat. Views of this frequently calving glacier also include vantage points of the adjacent Grand Pacific Glacier.

One of the most visited national parks in Alaska, Klondike offers a look into the state’s prospecting past. Part of the park’s popularity is due to its location in Skagway, a prominent cruise stop on the Inside Passage. Much of Skagway’s infrastructure that resulted from the 1897-1898 Klondike Gold Rush still remains today. These century-old buildings are now under the designation of a national historical park.

Chugach State Park is one of the largest state parks in North America. It’s also a top spot for adventure in Alaska. Only a short drive from Anchorage, this near 500,000-acre state park provides some of the most accessible outdoor experiences in the state. Alpine environments, dense forests, and big wildlife define many photos of Chugach.

The largest national park in North America, Wrangell-St. Elias is six times larger than Yellowstone National Park. So much space lends to an abundance of photo opportunities and adventure. Wildlife, alpine landscapes, and several glaciers are a few notable photo opportunities in the park. The historic towns of Kennicott and McCarthy within the park are also fun to capture with a camera.

The Alaska Highway, also known as the Alcan Highway, spans over a thousand miles from British Columbia to Delta Junction near Fairbanks. The Alcan is paved, but the surroundings are wild and all-encompassing. Stunning mountain landscapes surround every mile of this two-lane marvel of engineering. Visitor amenities along the route include gas stations, hotels, and restaurants.

Encompassing much of the Kodiak Archipelago in the Gulf of Alaska, the Kodiak brown bear is the most photographed resident of this refuge. The refuge is only accessible by boat or seaplane, and guided tours are the best way to snap a picture of a bear. Birding is also popular at the refuge, with over 200 species of birds known to visit the area.

This charming small town was established during the Klondike Gold Rush in the late 1800s. Haines is an essential connection between the Inside Passage and the Alaska Interior. The idyllic mountain and coastal landscapes of Haines pose for great pictures. In the fall, the area becomes inundated with bald eagles and people who want to photograph them.

A top attraction of Juneau, this acclaimed botanical center displays gardens on an Alaskan scale. Throughout the 50 acres of this rainforest garden are several eye-catching plants on display. The unique Flower Towers, made from upside-down tree trunks, are especially photogenic features of the space. Abutting this natural space is the entirety of the Tongass National Forest.

A popular cruise stop along the Inside Passage, the city of Ketchikan is full of colorful appeal. With a rich heritage and thriving fishing industry, the town welcomes visitors with vibrant storefronts. Ketchikan is also the top spot in the state to photograph totem poles. The city currently has over 80 authentic Native American Totem Poles spread throughout the charming downtown district.