After A Lioness Killed A Baboon, This Baby Was Left All Alone. What Happened Next Is Unbelievable. 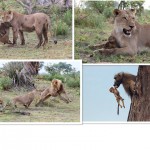 Photographer Evan Schiller and his wife Lisa Holzwarth dedicate a big part of their lives to animals. They are passionate about saving Big Cats and other animals all over the world. By using writing and photography, the two hope to raise awareness about the plight of these animals.
This couple was on a game drive in the northern Botswanas Selinda area when they experienced something amazing. They were taking photographs when a big troop of baboons came charging through the bush. Two lionesses were nearby, and what happened next stunned the photographers.

A brave baboon attempted to make a run for it. Unfortunately, a lioness caught it. As the baboon died, the photographers noticed a baby baboon slowly disengaging itself from its underside.

They held their breath as the innocent, frail baby stood before the lionesses. Miraculously, they didn’t harm him. In fact… One lioness gently and curiously examined the baboon. He was frightened and hurt. She softly picked him up in her mouth and settled down over him, watching. The little one even tried to nuzzle the lion, not knowing what she was. This behavioral twist was stunning, but that wasn’t even the most amazing part. Young male lions approached, and the lioness rejected their advances, causing a scene. That’s when the baby baboon’s father dashed in. He was waiting in a nearby tree, hoping to rescue his baby. So he snatched the little baboon, twisting away from the lionesses and bringing the baby back to a tree. Source: National Geographic The father baboon’s heroism paid off. Once he bravely saved his baby, he made his way over to a shade tree and the rest of his troop. After a time, the photographers saw that he baby was safely nestled in his father’s arms, resting.
It’s hard to say what’s more impressive: the lionesses gentle decision to protect the baby baboon or his father’s incredible bravery and rescue mission. Share this unbelievable story with others.