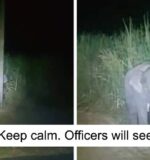 Around 2,000 elephants are living in the wild in Thailand, and one of them made headlines this week. A baby elephant was captured on camera in Chiang Mai, north Thailand, committing the cheekiest “crime” ever—the playful elephant was apparently feasting on some sugarcanes in a farmer’s field when approached by local people. In order not to get caught, the adorable baby animal hid behind a narrow post, making the local farmers and thousands of people online crack up with laughter. The baby elephant apparently stumbled on some sugarcane and decided to have a small, sugary feast. However, it probably didn’t expect people to find it, so when they did, the cheeky baby hid behind a narrow pole, believing no one could see the adorable trespasser. When the local people shone a light on the elephant and its conspicuous hiding spot, it remained standing perfectly still in hopes that it wouldn’t be spotted.

Without a doubt, the photo cracked hundreds of people up. Almost 3k people liked the post, and more than 1k shared it on their feeds. The adorable pic quickly spread to other social media platforms, including Twitter, Imgur, and Reddit.

Apparently, elephants absolutely love sugarcane and will go great lengths to get it
https://twitter.com/susantananda3/status/1227870808652992512