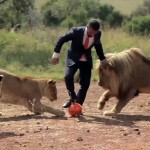 This man likes to play football with wild lions. While wearing a suit.
What a hero.
In this video for Van Gils, who are the official tailor to the Royal Dutch Football Association, Kevin Richardson can be seen tussling with the lions and having a friendly game of football.
The lions are affectionate and playful with him but they’re still LIONS. Full grown lions with teeth and claws and a lust for meat.

Richardson is a South African zookeeper who has worked extensively with animals in Africa. He slowly builds up the relationship with the animal until they are used to him. Incredibly, he’s even been accepted into prides of lions as one of their own. He’s also heavily involved in conservation projects in South Africa.
Can we introduce lions into the World Cup please? It would make it waaaay more interesting.