A Trillion-Tonne Iceberg Just Broke Away From Antarctica, And Here’s Why It Should Worry Us All 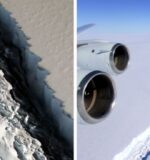 Despite a recent trend of disbelief toward global warming, Mother Nature has just made herself clear. A giant, trillion-tonne iceberg has just broken away from Antarctic ice shelf, and it’s an alarm we should all be heeding.

The iceberg, which has an area of roughly 4 times the size of London at 5800 km2, was part of an ice sheet known as Larsen C. Researchers at Swansea University had been watching the glacial divide for months, and using satellite imaging, they were able to determine that the iceberg ‘calved’ (broke away) from Antarctica sometime between July 10th and 12th. Hold on to your Titanic jokes for just a few more minutes, because this is actually the sign of a problem even larger than the berg itself.

Due to the rapid rising of temperatures in West Antarctica, ice shelves are becoming more fragile than ever. Not only does this massive iceberg pose a security risk to maritime traffic, its separation could cause glaciers stabilized by Larsen C to drift into the Atlantic Ocean and melt, which could raise the global water mark by 10 centimeters. The decimation of polar regions also threatens their native species, such as emperor penguins.

See it for yourself below, and read this essay by Adrian Luckman, Swansea University Professor of Glaciology and Remote Sensing.

A massive iceberg has just broken away from Antarctica, and it’s making scientists worry for the future It’s estimated to weigh a trillion tonnes, and has an area of 5800 sq km, the size of a small country Though it may be too early to tell, this fracture in the polar landscape could be the product of global warming That rogue ice disrupts maritime safety, then melts, causing water levels all around the world to rise Polar animal species, like emperor penguins, are also threatened by the slow decimation of their habitats This giant iceberg will now be monitored intensely, as will the resulting fragility of the glaciers it left behind