A Rare Winter Phenomenon Lights Up The Sky In A Stunning, Alien Display 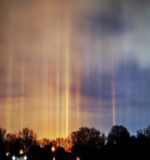 When temperatures drop and the night grows dark, most people prefer to scurry inside where it’s bright and warm. But if you look up, you just might see something magical.

If you happen, on a cold night, to see what look like columns of light stretching into the dark sky, consider yourself lucky — and take a picture! You’ve seen what’s known as a light pillar.

It looks supernatural, but it’s actually a stunningly simple atmospheric phenomenon that just happens to look like pure magic.

Nature is full of mystery and beauty, with unexpected reminders around every corner, like the shimmering “fire rainbows” that can appear in the sky. They remind us that the natural world is a truly amazing place, and that we’re pretty lucky to live in it!

Light pillars are visible when the temperatures hover around freezing and ice crystals can form in the atmosphere, and they’re typically seen over lighted areas like cities, although the phenomenon can happen with light from the sun and moon, too.

Take a look at some light pillars that have appeared all around the world, and the next time you’re out on a cold night, keep an eye out for these beautiful formations! If you didn’t know better, you might think this phenomenon was something supernatural.

It’s not, but that doesn’t take away from its stunning beauty. If anything, the explanation is so simple that it makes light pillars even more amazing! Light pillars form when hexagonal ice crystals form in the air. When viewed from the right angle, they reflect light, usually from below, and create the illusion of a column. Streetlights, city lights, and traffic lights are reflected, sending these pillars or light into the sky. But they don’t last long as the ice crystals move and the reflection changes. Unlike an aurora, which only happens at the extreme north and south and has to do with charged particles affected by solar winds, light pillars can happen anywhere it gets cold enough to freeze. Light pillars have been seen all over the world, and are often seen in different colors depending on the color of the original light source. Here, you can see that the light pillars come from the area’s streetlights — they’re the same color. Depending on the light and local conditions, they can be extremely bright and striking. These orange and blue light pillars are startling. Like a rainbow, it’s fascinating that some water hovering in the air can cause such a stunning visual display. Other times, the pillars appear softer, especially if there’s a lot of ambient light around, like in this neighborhood in Laramie, Wyoming. But also like rainbows, they don’t last long, and can only be seen from a certain angle. As the ice crystals move and disperse, the pillars fade. And sometimes, you can even use them almost like a map of all the light sources in an area. This image shows you where light is coming from in Stockholm. And here, you can see how the lights on the ground are reflected in the sky.

Have you ever seen a light pillar? Let us know, and send a photo if you have one.

And be sure to SHARE this amazing phenomenon with your friends, and remember that even though you might be sick of the cold, this would never happen without it! —>>>[H/T: My Modern Met]