A Man Takes A Single Rake to The Beach… When You Zoom Out And See It’ll Blow Your Mind! 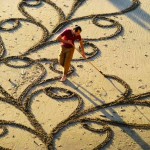 Looking out across the beaches of San Francisco, you’re likely to see beautiful sand, crashing waves, and people sunbathing or flying a kite. If you’re really lucky, though, you may get a chance to see Andres Amador as he creates one of his “earthscapes,” the name he gives to the insanely gorgeous, and massive, designs he draws in the sand. And they are incredible.

“Draws” may not be the right word. He doesn’t sit down or stand motionless as he uses his hand to create designs. Instead, Amador steps and leaps swiftly over the beach, dragging his rake as it scrapes the top layer of the sand, revealing the darker, wet sand below. The contrast creates stunning flowers, snowflakes, and abstract geometric designs that can span 100,000 square feet in area.
“I kind of consider that I’m painting, is what it feels like. But I’m using my whole body and the rake is the brush. I start just before low tide and end just after low tide, so that when it’s coming back I’ve used up the area that it had already left behind,” Amador says. Unlike many works of art — which are meant to last for years, if not forever — Amador’s earthscapes are brief, fleeting things of beauty. Amador works during low tide, when the ocean recedes into itself and the maximum amount of sand is exposed. This also means, of course, that when the tide comes back, his beautiful works of art will inevitably be swiftly washed away, leaving a blank canvas, like they never existed at all.

Viewing the earthscapes from above, it’s amazing to know they’re created by hand. The precision and perfection of the geometric designs look like they were made by a computerized machine, programmed down to the inch. Amador says he sometimes uses a rope as a compass, but more often than not, it’s just him and his rake doing it freehand. People may think he has always been artistic and creative, but Amador actually has a seemingly unlikely inspiration: math. He says that when he was growing up, he never actually visited the beach and it wasn’t until he started studying forms of geometry around the world — like crop circles, ancient architecture, and sacred geometry — that the idea came to him. “My grandmother always said she wanted in her family a doctor, a lawyer, and an engineer. They would always ask me, ‘So when are you going to get serious?’” Amador says. But as he studied geometry, he found his purpose. “I was on the beach explaining to a friend what I’d been learning, and I realized I could do it on the beach — that could be the canvas.”

Not surprisingly, Amador says the best beaches to work on are large, very flat, and vacant. While any beach goers that do show up are usually content to watch from a distance as he works, Amador does have one nemesis — dogs. He says they’re the worst for creating scars in the sand. But even if he does draw an audience and a stray pooch or two, Amador says it’s easy to tune everything out.
“Even just being next to the water, you can’t hear the cars. The city washes away. In fact, I’m always surprised that there’s such amazing beaches in San Francisco,” he says. “Nothing else is on my mind when I’m doing the artwork.”

Despite their intricacy, each design only takes about two hours to complete. But still, after all that work, does Amador have a hard time letting his creations go? It doesn’t seem like — he says he does it more for the process instead of the result. “I’m not attached to the pieces once they’re created — I can’t hold onto them. When I’m done with the piece and I can take my photos and sit with them for a few minutes, I feel complete. I feel that it has passed through me, and it’s now beyond me and I can leave.” He does admit that it’s difficult when he doesn’t have time to finish a piece, though. “When the tide is returning and I’m not yet done, that’s when it’s tough.”

Although Amador does many of his designs simply for the joy and beauty of it, he says he’s also available for hire and has created earthscapes to serve as a backdrop for memorial services and marriage proposals, among others. He also hosts workshops and outings.