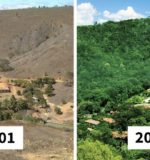 According to the United Nations’ Food and Agriculture Organization, 129 million hectares of forest, an area almost equivalent in size to South Africa, have been lost from the Earth forever since 1990. An area roughly the size of the country of Panama is being lost each and every year.

With some 15 percent of all greenhouse gas emissions come from deforestation, and countless species of plants and animals losing their habitats every single day, these are absolutely devastating figures for the health of our planet, and it simply cannot be allowed to continue. But what to do in the face of such massive environmental carnage? It can make the individual feel small and helpless, as we ponder the impact that we can actually make. Will anything that we do make the slightest bit of difference? Brazilian photographer Sebastião Salgado and his wife Lélia Deluiz Wanick Salgado decided to show what a small group of passionate, dedicated people can do by turning deforestation on its head, and begin the process of reforestation.

Because really, Mother Nature is a hardy soul that will always find a way to bounce back, given the right conditions. Salgado is a renowned figure, having won nearly every major award in photojournalism and publishing more than a half-dozen books. Back in the 1990s, exhausted physically and emotionally after documenting the horrific barbarity of the Rwandan genocide, he returned home to his native area of Brazil, which was once covered in lush tropical rainforest. He was shocked and devastated to find that the area was now barren and devoid of wildlife, but his wife Lélia believed that it could be restored to its former glory. “The land was as sick as I was – everything was destroyed,” Salgado said in The Guardian back in 2015. “Only about 0.5% of the land was covered in trees. Then my wife had a fabulous idea to replant this forest. And when we began to do that, then all the insects and birds and fish returned and, thanks to this increase of the trees I, too, was reborn – this was the most important moment.” Together, Sebastião and Lélia founded Instituto Terra, a small organization that has since planted 4 million saplings and has brought the forest back from the dead. “Perhaps we have a solution,” Salgado said. “There is a single being which can transform CO2 to oxygen, which is the tree. We need to replant the forest. You need forest with native trees, and you need to gather the seeds in the same region you plant them or the serpents and the termites won’t come. And if you plant forests that don’t belong, the animals don’t come there and the forest is silent.” And so, after taking utmost care to ensure that everything planted is native to the land, the area has flourished remarkably in the ensuing 20 years. Wildlife has returned, where there was a deathly silence there is now a cacophony of birdcalls and insects buzzing around. The project has inspired millions by giving a concrete example of positive ecological action and showing how quickly the environment can recover with the right attitudes. “We need to listen to the words of the people on the land,” Salgado explained. “Nature is the earth and it is other beings and if we don’t have some kind of spiritual return to our planet, I fear that we will be compromised.”