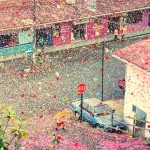 However, most associations of eruptions have to do with the volcanic kind, hot, fiery magma oozing down the sides of charcoal-colored volcanic rock – I’m sure you’re somewhat familiar with the phenomenon.

But what about an eruption of flowers? Yes, flowers, as in vibrant and colorful petals raining down upon the earth.


It sounds absurd, impossible even, but the inhabitants of a small village in Costa Rica had this amazing concept become a reality when several millions of flower petals fell from the sky to settle upon their town.

It was thanks to the popular electronic company, Sony, that such a surreal experience was made possible. The company chose to use an eruption of flower petals in an ad campaign to promote their new line of 4K ultra high-definition television sets. Their goal was to demonstrate the new televisions’ sharp screen displays and their proficient color capabilities. I’d say their attempt at making a captivating video to exhibit amazing visual capabilities was successful, as this video is simply outstanding.

Even before any of the vibrant petals are shown, the ad opens on the amazing scenery of Costa Rica; thin wispy clouds part to reveal rolling hills and mountains, covered in lush green foliage, and the opening of what looks to be some sort of a volcanic dome is centered on the screen.

Right from the get go, there’s already an element of surrealism. The video only grows more astounding as it proceeds, showing viewers the millions of flowers filling a volcano as they start to move and shift, even bubble up as if about to boil over. It’s not long before the flowers shoot into the sky and the “eruption” commences. It really is an outstanding sight to see such brilliantly colored flower petals shoot into the sky, resembling some form of a vibrant multi-colored fire spit instead of the orange, red, and yellow hues that typically emerge from a volcano.

The millions of petals travel far, tumbling across the ground, moving through streams, being caught up in the wind, and settling upon the town, creating a fantastic, beautifully colored, Costa Rican landscape. There isn’t anything else like it.

Sony’s ad certainly required a lot of work to create such an amazing display. The video was commissioned by the McCann advertising agency, and photographer Rick Meek took photos of the entire spectacle. It took an astonishing 8 million petals to create the magnificent effects, weighing an impressive total of 3.5 tons and taking Sony’s creative team and residents of the village over 2 weeks to gather. All the petals were either from real flowers or made from biodegradable materials, so there was no negative effect on the environment. The British special effects team for the campaign also brought in wind machines to help create the effects and carry the flowers through the area.

Admittedly, some special effects were added to the video, but the director, Jaron Albertin, does assure us that as much of the video is as real as possible.

While it would have been even more outstanding for such a spectacle to have occurred naturally, Sony’s video is truly breathtaking. They created astounding effects and colorful displays with the ad that are beyond imagination.