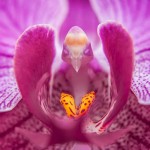 Flowers come in all sorts of shapes, sizes, and colors,

leading to a wide array of appearances.

You’ve likely seen many varieties in your life time,

but some of these flowers resemble other figures or animals so much that it’s downright shocking.

1. Monkey Orchid (Dracula Simia)
This epiphytic orchid has an arrangement of column petals and a lip that make it look just like a monkey’s face. It blooms at any season and the flowers smell like a ripe orange. 2. Naked Man Orchid (Orchis Italica)
These flowers are native to the Mediterranean and are popular for their bright pink and purple, densely clustered flowers that look like naked men. 3. Dancing Girl Impatiens (Impatiens Bequaertii)
These impatiens are a rare species from the rainforests of East Africa. They’re relatively small plants, only growing about a foot across with blooms that are barely half an inch. One of their most notable features is that they resemble dancing, female figures. 4. Laughing Bumble Bee Orchid (Ophrys Bombyliflora)
This species of Ophrys (also known as bee orchid) is native to parts of the Mediterranean region.It’s named after the Greek word bombylios, meaning bumble bee, for the appearance of its flowers. 5. Swaddled Babies (Anguloa Uniflora)
This type of orchid has amazing flowers that look as if babies are swaddled inside. 6. Snap Dragon Seed Pod (Antirrhinum)
When in bloom, snap dragon flowers are absolutely beautiful. However, their seed pods look much more macabre, looking like little skulls hanging off a branch. 7. Happy Alien (Calceolaria Uniflora)
This mountain plant is originally from Tierra del Fuego in the southern part of South America. Its yellow, white, and reddish colored flowers look like some form of happy alien. 8. Moth Orchid (Phalaenopsis)
One of the most popular orchids in trade, the moth orchid’s scientific name is probably a reference to the genus Phalaena,which was given to a large group of moths.
And it’s not difficult to see why it got its name – some of the species closely resemble moths in flight.