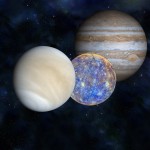 Venus, Mercury, and Jupiter will each appear as naked-eye objects in our skies this week. Composite image courtesy NASA
As three stellar jewels take their final bows in the evening sky, Mercury and Venus put on a splendid show for sky-gazers.

Cosmic Trio. On Monday, May 19, face the southwestern horizon just after nightfall, and gaze at three of the brightest stars of spring slowly fading away into the glow of twilight.

Starting from left, they are Procyon, the brightest member of the Canis Minor constellation; the king of all planets, Jupiter; and finally, yellowish Cappella, the lead star in the constellation Auriga, the charioteer. All three dominate the skies just after sunset.

Jupiter is particularly eye-catching through binoculars and small backyard telescopes, which reveal its retinue of four large moons and colorful cloud-top features.

Catch this sky show now before the cosmic trio gets buried in the glow of the sunset as we head toward June.

Neptune and Luna. On Wednesday, May 21, the waning quarter-moon helps point to the distant, blue ice giant in the early morning skies.

Face the southeastern sky before local dawn and soak in the beauty of a thinning crescent moon.

Those with backyard telescopes can look to the far right of this morning’s moon for a tiny, faint, 7.8-magnitude disk—Neptune. The planet and the moon will be separated by no more than 5 degrees, equal to the width of your three middle fingers held at arm’s length.

Shooting Star Surprise. On Saturday, May 24, watch for a possible never-before-seen meteor shower. Earth may plow through a debris stream left behind by comet 209P/LINEAR. The passage may generate a flurry of shooting stars.

Some optimistic experts are predicting meteor rates that may even pass 200 per hour! Stay tuned for details.

Mercury Shines. The most elusive of all the naked-eye planets, Mercury, is slowly emerging from the glare of the setting sun, where it’s been for the past few weeks. On Sunday, May 25, the innermost planet of the solar system reaches its maximum distance from the sun from Earth’s vantage point, and in so doing offers sky-watchers the best evening views of Mercury for the entire year.

To track down Mercury, you will need to find a location that has a clear line of sight right down to the western horizon. Begin looking for the tiny planet about 30 minutes after your local sunset, about 12 degrees above the horizon. This is a little more than the height of your fist held vertically at arm’s length.

Since it is eternally embedded in the afterglow of the sunset, Mercury will always remain a challenge to find. Try using binoculars to sweep the sky region—it should make it much easier to spot this faint, starlike object. Of course, once you know where exactly to look in the sky, try glimpsing it with your naked eyes.

By early June, the scorched little world will have sunk closer to the sun and be too difficult to see, so head outside on the next clear evening to catch a glimpse of the fleet-footed planet.

Venus and Moon Pair Up. It’s worth taking a peek outside towards the low eastern sky about an hour before local sunrise on Sunday, May 25, for a waning crescent moon posing with Venus.

The two worlds will have a particularly eye-catching close encounter, being less than 3 degrees apart.

This sky event will surely make for a great photo opportunity, as the foreground landscape can be used to frame the cosmic pair.