2 Giant Kangaroos SHOCKED A Neighborhood With A Crazy Fist Fight!!! 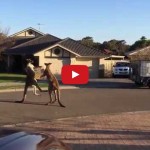 When it comes to fist fights in movies, there are only two things that really matter: Who won, and what music soundtracked the epic battle. This fight that broke out between two wild kangaroos in the middle of a suburban neighborhood in Australia was truly cinematic, and while it didn’t have a clear winner, it was uploaded to Youtube with some pretty epic music.

Not surprisingly at all, boxing Kangaroos are generally males fighting over females. So…basically…animal fist fights happen for some of the same reasons humans get into tussles!

What would you do if kangaroos – or other wild animals – started fighting in your neighborhood?