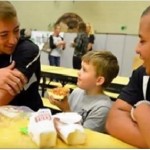 Chris Kuykendall looks like your typical 16-year-old star football player, but when he was younger, he kept a deep dark secret. Chris was horribly bullied as a kid and says he made the terrible mistake of never telling his parents. While the harassment would end when he got an older, he never forgot the deep wounds it left. When Chris heard about a 5-year-old who was bullied so badly he would throw up before school, he knew he had to do something. Not only had Chris experienced the same thing, in his community, a 13-year-old had recently committed suicide due to bullying. He knew he had to put an end to the madness.

“It just hit home. I remembered how I felt when I was getting bullied. It just fired me up. I wanted to change that right then and there. I didn’t want him to go another day, wake up another day, feeling like he didn’t need to go to school,” Chris told Meredith Vieira. He got the idea to invite the kid to lunch with him. That way his bullies could see the little guy was one of the cool kids. It worked immediately, and when Chris’ fellow athlete Brevin Young, who was also bullied as a kid, got wind of the lunch, he knew he had to do the same for another kid.

Together, Chris and Brevin started the Eagle Buddies. The group pairs older athletes with bullied kids to give them the confidence and protection they deserve. See how Chris and Brevin are changing lives and stopping bullying in its tracks below!

Please SHARE to take a stance against bullying and support the Eagle Buddies!