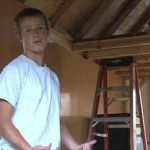 aven’t even hit 30 yet and I am already trying to figure out how I will ever afford a mortgage. Maybe I don’t have to though. In fact, maybe I should stop listening to all the financial experts who are older are start listening to some younger, wilder minds.

Take this kid for example. He lives in a house on wheels and couldn’t be happier.

How did this 16-year-old afford his own

Build your own tiny house on wheels. (Image: Screenshot/Youtube)

This teenager plans to finish the house so he can park and live in it when it comes time to move out from under his parent’s roof. He took woodshop at his local high school and those lessons paid off big time when building his future home.

Measure twice cut once is a good rule for home building. (Image: Screenshot/Youtube)

Apparently, it’s really not all that hard to build. He claims it’s not a complicated process and that anybody could do it.

Watch the video and try to figure it out for yourself. Excuse me, I have to go get some building supplies…