15 Reasons Why Norway Should Be Your Next Travel Destination 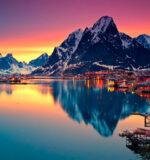 From beautiful forests and deep fjords to snow-capped mountains and cold, arctic tundras, Norway has everything for people who love the outdoors. They recently made their money beautiful, so it makes perfect sense that the rest of their country is beautiful as well.

Norway is a geographical rarity because its length from north to south gives it one of the greatest varieties of environments in a single country in Europe – from deciduous forests to arctic tundras. It should be a far colder and icier country than it is, but its temperatures are somewhat regulated by the relatively warm North Atlantic and Norwegian currents. Nonetheless, its coasts are slashed by fjords that were carved by massive glaciers and ice sheets during the last ice age, giving its rugged northern coasts even more majestic charm.