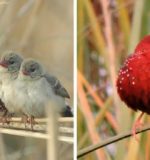 With so many stunning bird species out there, they never cease to amaze with their wide range of colors, sizes, and other traits. Some of them have intricate and stunning plumage that can be compared to a fruit or a berry. This is especially true for a species of birds that are unsurprisingly called strawberry finches. These small, sparrow-sized birds of the family Estrildidae can be easily recognized for their scarlet body paired with tiny white dots. Strawberry finches are also commonly known as red avadavat or red munia. They can be found all across tropical Asia. They prefer to live in open fields, grasslands, jungle clearings, gardens, and meadows. Strawberry finches thrive in tropical temperatures, thus they are prone to losing plumage intensity in cooler, drier environments. This is often observed in caged birds. Red avadavats are about 10.16 centimeters in length (3 to 4 inches). As is common in birds, males and females are quite different in their appearance. The biggest difference is that males have a deep red crown on their back paired with white streaks under the eyes. The sides of their head and breast are embellished with scarlet. Their tail, wings, and overfeathers are marked with white spots. The beaks are also red. However, this signature look can only be witnessed during the breeding season. Once the breeding season is over, they become much more similar to the females. Females have a dark brown crown, back, and tail with much fewer white spots on their backs than males in the breeding season. Juvenile strawberry finches look rather dull and are grayish-brown all over. Bright red plumage plays an important role in attracting females; in addition to that, male strawberry finches have their own mating dance, which begins with the male carrying a grass stem or feather in their mouth and bowing with their feathers upright. Typically, these birds live in flocks of around 100 other birds of their species. However, they separate from the group after successful pairing to build nests. While breeding months vary regionally, they typically breed in the second half of the rainy season and into the following dry season.