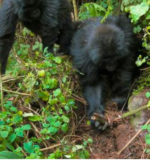 Just days after a poacher’s trap killed a young mountain gorilla in Rwanda’s Volcanoes National Park in 2012, scientists spotted something remarkable: two young gorillas worked together to dismantle other traps in the area.

“This is absolutely the first time that we’ve seen juveniles doing that … I don’t know of any other reports in the world of juveniles destroying snares,” Veronica Vecellio from the Dian Fossey Gorilla Fund’s Karisoke Research Centre in Rwanda told National Geographic.

“We are the largest database and observer of wild gorillas … so I would be very surprised if somebody else has seen that.”

Local bush meat hunters set up thousands of these snares to catch antelopes and other animals for food. While reportedly they aren’t interested in primates, young gorillas are sometimes accidentally caught up and left to die.

Traps are created by tying a noose to a branch of bamboo stalk, and bending it down to the ground, with another stick or rock to hold the noose in place. Then, they are covered by dry leaves and branches.

When an unknowing animal triggers the anchoring rock or stick, the branch flings back up and tightens the noose around it, holding it in place until the poachers come. “If the creature is light enough, it will actually be hoisted into the air,” Ker Than wrote for National Geographic.

Adult gorillas are large and strong enough to extract themselves from traps, but for young gorillas, it’s all different. If they survive being stuck in the trap, they can easily die from injuries sustained during their escape, indluding dislocated bones and gangrenous cuts.

This is particularly bad news since the gorillas in this part of the word – a subspecies of the eastern gorilla called Gorilla beringei beringei – are now critically endangered. Their population just cannot sustain the consistent loss of young gorillas to traps by poachers.

Vecellio and her team had been searching the park daily for these traps and dismantled them, but in 2012, a local tracker spotted one near the Kuryama gorilla clan, which had lost one of its juveniles to a snare just days earlier.

The tracker, John Ndayambaje, was about to dismantle the trap when the dominant male of the clan sent a warning signal to back off.

“Suddenly two juveniles – Rwema, a male; and Dukore, a female; both about four years old – ran toward the trap,” Than reported.

“As Ndayambaje and a few tourists watched, Rwema jumped on the bent tree branch and broke it, while Dukore freed the noose.”

The two juvenile gorillas then reportedly found another snare, and with the help of another young gorilla, managed to dismantle that one too.

According to scientists, the confidence and speed with which the gorillas destroyed the traps suggest they had already found out how dangerous they were, and dismantled them before.

Many suggested a great solution would be to have researchers go out and teach more gorillas how to dismantle these traps. However, Vecellio and her team argues it would be unethical to mess with the gorillas’ behaviour to that degree.

So, they can only hope juveniles continue to spread their knowledge throughout the clan by themelves.

“No we can’t teach them,” she told National Geographic. “We try as much as we can to not interfere with the gorillas. We don’t want to affect their natural behaviour.”

Indeed, that would be just another a trap.